Revere Ministries
And they overcame him by the blood of the Lamb, and by the word of their testimony; and they loved not their lives unto the death. Revelations 12:11 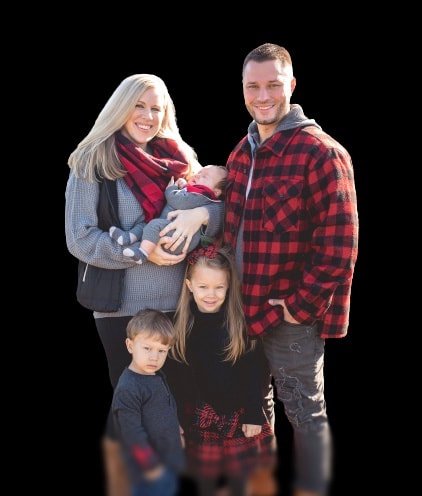 ​Hello! My name is Jerry. My wife, Megan, and I got married in 2013! We have three beautiful children named Oaklyn, Lincoln and Dawson. We reside happily in Indiana, Pa where we are trusting God to continue shedding the Light of His goodness through Jesus Christ into our community and the surrounding communities.

For me, I was raised in a non-God-fearing home for the first 6 years of my childhood. I remember occasionally walking through our neighbor's yards and attending the Methodist Church not far from our house. It was such a joy playing with the children and hearing about Jesus but the true life changing power of Jesus, at this point, was certainly unknown to both me and my family. We had many family struggles during those 6 years. I do remember a few fun times, but most of those memories always resulted in extreme fighting between my parents. These fights would escalate into physical and emotional abuse. There would be blood...everywhere as my parents would physically fight and scream at each other at least a few times a week. There are many things that can be said about this season of my childhood but I want to quickly fast-forward and mention about the goodness of God! Around the age of 6 my dad had a workplace accident. He fell out of a tree onto a fire hydrant and had a pretty serious neck injury. There were many challenges arising physically and soon financially because of his inability to move his neck without pain. During this time, he was invited to a church service by a co-worker/friend, which my dad hesitantly accepted. It was during this church service that the pastor verbally called out a healing for someone's neck. As my dad stepped forward, the pastor declared "the Lord has healed your neck" and He did! There were still many struggles ahead for our family, but there were certainly some noticeable changes from this point on.

​We attended church as a family, religiously, for about 6 years after my dad’s neck was healed. This would put me around the age of 12. During this 6 years of time I witnessed my mom as well as many other family members come to the saving knowledge of Jesus Christ. I also witnessed my brother, who was born within the year my dad was healed, have a better and more stable home environment. Praise God! During these 6-7 very committed years of attending church we shared in countless fun and exciting times! Especially for me, I started to feel a peace in my heart that I never quite knew before. However, after a few years I watched my parents grow slightly apart due to the many demands within the church. There were also many hurts that took place towards my family and towards the church as well, which resulted in a separation from the church we were attending.

During this next season of me going into my teenage years my parents attended various churches; however, I personally was never committed to a church. Time would escape me to go into all the details of my childhood upbringing, for both the struggles, and for all the times God never failed me or us. But I will certainly highlight a few lifechanging events up until now.

​Our family lives to honor and glorify the name of Jesus. By no means have we always made the best decisions even after seeing the strength and kindness of our very real and abiding God. However, we have come to see His mighty hand of deliverance is strong but His mighty hand to keep us and continue leading us is equally as strong!